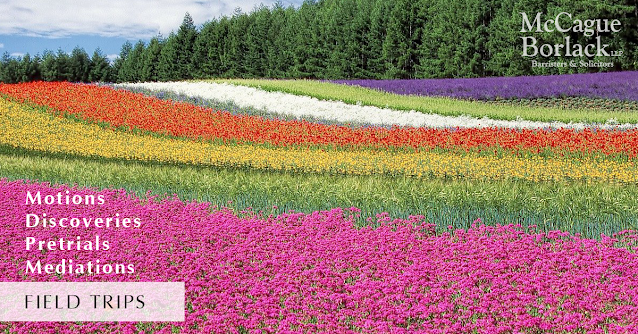 Summer student field trips at McCague Borlack can range from examinations of discoveries to mediations, pre-trials, arbitration and motions – all key parts of civil litigation.

Students at MB play an active role in these field trips, often assisting with preparing key documents, and/or taking notes. These notes usually become part of the client report and are used throughout the life of the file.

Recently, I attended a motion where we were trying to get an adjournment. When we realized an adjournment would not be granted, instead, our lawyer had to make submissions (which are oral arguments) on the main issue. I did not expect submissions to be done during a motion, and that amped up the excitement of the field trip. Although this unpredictability seemed stressful at first, I learned from the lawyer on the file that litigators must be prepared for anything. As he stated, “Hope for the best but expect and plan for the worst!” Of course, he had the full submissions prepared and ready in case.
Getting to hear litigators be zealous advocates in real-time, while also having my notes used for the client’s report makes me feel like I am contributing in a meaningful way and allows me to harness my own professional development.

That’s litigation – the learning curve is high, and the work is truly one of a kind.
by Rotem F.
Email ThisBlogThis!Share to TwitterShare to FacebookShare to Pinterest
Newer Post Older Post Home