Speaking on my very first motion…alone! 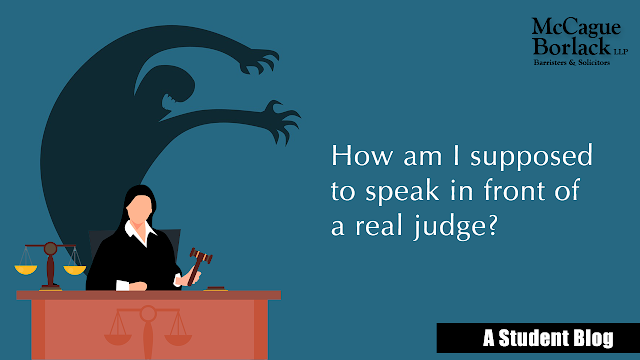 DING DING. Off goes the list serve notification, and a new assignment has just come in for me. As I read the email, suddenly I am hit with a wave of excitement, and then utter fear. I have just been assigned to speak at an unopposed motion to request an adjournment…alone. Every litigator loves being in the courtroom, and consequently, I have always dreamed of speaking in court. However, now that the dream was about to be a reality, I felt immensely unprepared. >

"How am I supposed to speak in front of a real judge? How am I being trusted with this? What if I screw up big time? So many questions were rushing through my head."

As articling students, we are afforded the opportunity to speak at all types of motions. Despite this motion being unopposed, I knew this does not diminish the level of preparation I would require. I instantly knew that in order to be prepared for this, I needed to take advantage of all the resources available to me at McCague Borlack. First, I called the assigning lawyer, and he walked me through everything I needed to know. I was to look through all the materials, including the motion record, supporting motion record, evidence, and pleadings. I reviewed these in-depth, as my motto in life has always been that there is no such thing as over-preparation (we can debate this another time). Once I felt like I really had the materials down and understood the case, I began to draw a very sparse outline of points I want to make sure I cover. You never want to be reading from a script in front of a judge. However, it can be a nice piece of mind to have a few bullet points near you of the main gist of what you want to say, especially for your first time. I picked this practice up from my mooting days which was now proving to be an asset in terms of experience. Once the sparse outline was done, I got to practicing in front of a mirror to ensure I was prepared to articulate what I was seeking from the judge in a professional and competent manner.

Despite my preparation, I was still terrified the morning of. Every lawyer I spoke to told me I would be fine and not to stress, but I was still worried about all the “what ifs”. I made it to be some monster it wasn’t. I attended the motion (on zoom, as most motions are still being heard through video conference), outlined to the Associate Judge what exactly we were seeking, directed her to the exhibits which supported what we sought, and evidenced that the motion was unopposed. The next thing I know, the Associate Justice told me the adjournment has been granted and the endorsement will be sent shortly. I was dumbfounded – it was all over within 10 minutes! The first thing I thought to myself was that I had shed a skin. I had my first independent appearance in court and didn’t fail. It was an amazing learning opportunity and I know I will be less terrified for the next opportunity to appear independently in court. And yes, I say less terrified because let’s be real; the nerves never truly leave in entirety.