Taking a Lesson from Jon Snow 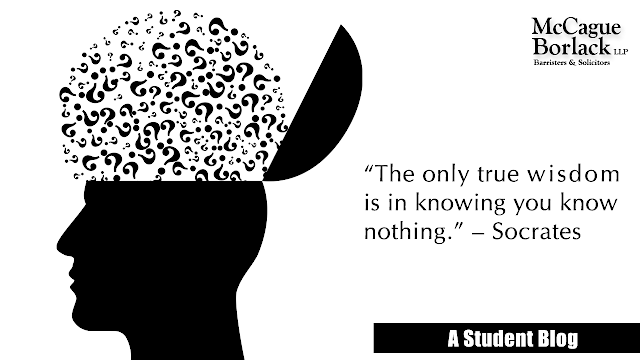 “The only true wisdom is in knowing you know nothing.” – Socrates

Also known as the Socratic paradox, this principle allegedly uttered by the Greek philosopher Socrates is a great lesson in humility, critical reflection, and—when using it as an excuse for the C-minus grade you got in one of your courses—self-referential humour.

Unlike my fellow articling students, I’m brand-spankin' new. I don’t just mean that I’m new to McCague Borlack... I’m new to the practice of law itself. That’s right, articling is my very first venture into the legal profession as a (now graduated) law student, after forgoing the traditional summer student placements during the completion of my JD.

While this has certainly been a learning curve for all of us students, it goes without saying that the articling experience has been quite different for me compared to my colleagues. That doesn’t necessarily mean it’s harder or more challenging, it’s just different.

For starters, given my severe lack of prior firm experience and having taken no particularly relevant elective courses in law school, I knew nothing.

Honestly, that might be generous. I probably knew less than nothing, which is an even greater (or lesser?) amount of nothing than our old pal Jon Snow from Game of Thrones knew. It’s a weird flex, but I’ll tell you why it’s OK.

It’s because I knew that I knew nothing.

To know that you know nothing is incredibly humbling, especially in an industry that radiates (perhaps a little too much) confidence. It gave me no reason to inflate my ego or pretend to be someone I wasn’t because I knew that any attempts at the sort would immediately be recognized for what it was… BS. In that regard, it definitely wouldn’t have served me well to act like I knew how to do a task that I was assigned when I didn’t, lest I wanted to face the wrath of angry lawyers impatiently waiting for the drafted AODs or memos they asked for weeks ago.

A month and a half into articling, I can positively say that I know more now than I did when I started. But at the same time, I recognize that I still know nothing. Because total knowledge isn’t achievable. There’s no pot of gold at the end of the rainbow because rainbows, fun fact, are a full circle. Knowledge is an endless journey that one must strive to retain, as there is always something new to learn. Suffice it to say, I look forward to seeing where this journey takes me next.