Handling my own Small Claims File 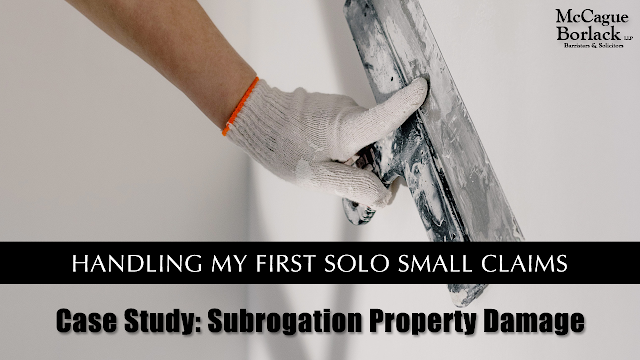 One of the best parts of my articling experience has been having the opportunity to run my own Small Claims Court files. Due to the unique rules of the Small Claims Court, articling students have standing to appear as counsel without the need for the direct supervision of a fully licensed lawyer.

Throughout the last ten months, I was handed the reigns on three small claims files. Here are the highlights of one...

My first small claims file was a subrogation matter in which we were tasked with recouping funds that were paid to a homeowner by their insurance company after their property was damaged through the negligence of two third parties. I received this file in the first month of articling through the student list. The email read: “Who wants to take on this Small Claims matter?” I eagerly replied stating that I would be assisting. I was excited but felt a pang of nervousness: where do I start? What does running a file even involve?

After a quick call with the assigning lawyer, I had a game plan: first, to draft a litigation plan. This involved reviewing the client documents and drafting an initial opinion to advise our client what the strengths and weaknesses of the case are, what information we still need to obtain, and what our chances of recovery are. I was nervous about missing the mark (this was my first real legal opinion after all!) but comforted by the fact that someone would be reviewing my work.

After doing my research and drafting an opinion, I discussed it with the lawyer. A few rounds of revisions later, I was given the green light to send it to the client. I couldn’t believe that within the first month of articling I was already communicating directly with clients!

Next, I drafted the pleadings and contacted a process server to have them filed with the court and served on the defendants. Upon completing each step, and upon receiving each of the statements of defence, I notified the client. In addition to these regular updates, I was also tasked with drafting formal status reports every 90 days, as per this client's guidelines. This taught me the importance of using a tickler system so as not to miss an internal deadline.

Due to the nature of subrogation files, my goal throughout this file has been to recoup as much of the client’s losses as quickly and for as little expense as possible. The backlog in the Small Claims Court is extreme right now due to the pandemic, and I knew we would be waiting months for a settlement conference. Therefore, I took it upon myself to email the defendants with our damages documentation and to canvass their willingness to engage in settlement discussions.

Unfortunately, because this file involved two defendants who each pointed the finger at the other, we haven’t been able to settle through informal negotiations. The good news is that the Small Claims Courts have now resumed regular operations, so a settlement conference is on the horizon. I can’t wait to see what happens next, and I’m so glad to be at a firm that gives its students so much responsibility.

I believe running these small claims files has helped set me up for success after articling, and because of these experiences, I feel much more prepared to tackle whatever is thrown at me next.