It’s been a few weeks since orientation ended and the real work rolled in at McCague Borlack LLP. I have just started to get used to the constant panic attack of not knowing anything, and begun to enjoy myself. I have also never learned as quickly in my life. That, I believe, is due to a combination of the hands-on real work that we as summer students get assigned to and the “field trips” we get taken on. My first day of “real work” I was asked to put together a motion record for an upcoming motion, to be done that very same day. Whaaaat? Luckily the articling students were still around for me to pester. At the end of it, I saw the pieces fit together and understood why I was doing what I was doing. What a great feeling.

When people picture lawyers chained to the desk, they probably haven’t met a litigator. Even though it has only been three weeks in, I have already had the opportunity to attend two discoveries and a mediation. It was fascinating to watch the different styles of various lawyers in examining the same witness. The choice of words and the line of questioning really showcased the position the lawyer was taking towards this witness as well as the amount of preparation done. It was remarkable to see the precise wording and focused questioning by the senior partner I went with.

It is also true that each file is very different from the other. While I attended two discoveries, one had involved an interpreter, while the other involved a witness who is a lawyer by training. Hence, I saw two very different atmospheres and responses from the witness. At the end of the day, the most riveting to see was the relationships between counsel when it’s “on” and they are advocating for their client, and when they are just chatting with each other and sharing battle stories. 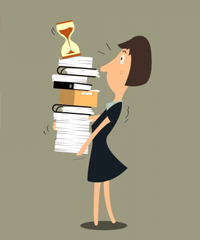 Mediation, on the other hand, was very different. All parties and all clients are at the table with (hopefully) the same goal in mind – to reach some kind of an agreement. At the same time, stakes are on the table as this is someone’s case. After openings made by each counsel, it becomes a sort of numbers game, and trying to keep each other in settlement talks long enough to achieve just that. The costs and consequences of continuing the case towards trial always linger in the back of everyone’s mind. The best part was, of course, that we reached a settlement and everybody was relieved it was over and (somewhat) happy.

Having said all that, field trips are fun but it is largely about time management as a summer student. While it is exciting to be going in and out of the office, it is important to keep in mind what assignments and tasks need to be done for other lawyers and to keep on track with the small claims files. It is definitely a balancing act that we continuously work at!